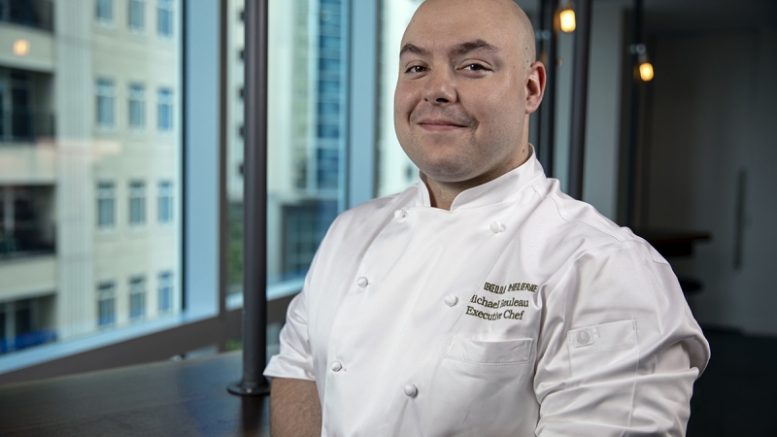 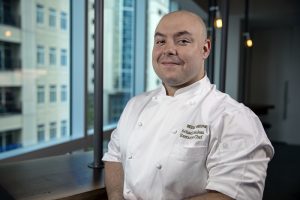 Michael Rouleau, a Connecticut-raised Philadelphia Eagles fan, is the new executive chef at La Belle Helene, a French brasserie opening in uptown later this year. He’ll also oversee Parliament Coffee, which shares the address of 300 S. Tryon St, as well as a cafeteria for the office building’s tenants.

Rouleau, who turns 30 years old in early July, comes from Philadelphia, where he worked as the executive chef of the Barnes Foundation, an art museum with three food and beverage concepts as well as a catering kitchen.

La Belle Helene was created with help from famed chef Alain Ducasse’s consulting firm, Ducasse Conseil. Some of the menu testing for the restaurant took place in Rouleau’s Philadelphia kitchen, and his colleagues were quietly watching him as a contender for the executive chef job in the new space. Starr Catering Group, which oversees the hospitality program at 300 South Tryon, also manages the Barnes Foundation kitchens.

He was still helping the Ducasse team set up tastings for potential executive chefs at the restaurant, when in November, they made a decision. They asked Rouleau if he wanted the job. He moved to Charlotte on June 5, and was surprised to see how much progress the city has made.

“I had my first trip to Charlotte in August of last year; it was a two-day trip,” Rouleau says. “I literally just ran around for two days. But I could already tell how much it’s changed since.”

Before working with Starr Catering, Rouleau worked at restaurants by chef Kevin Sbraga, winner of Top Chef season seven. He got his start working in a grocery store kitchen in Connecticut at 15; his friend’s dad helped him get the job. Even then, Rouleau says, he knew he wanted to be a chef. His first day in the kitchen, he stood in a corner, cleaning out peppers and putting them in a machine to be diced. It made his arm hurt, and he hated it. The next day, though, the chef showed him what those peppers would be used in, and that changed Rouleau’s opinion of the job.

After working chef de cuisine jobs in Connecticut at 20, he decided to take a step back—and a step down to line cook—to learn more. He moved to Hawaii for a year, training and working, before moving to Philly.

Rouleau’s background is, fittingly, anchored in French cooking. He’s cooked at Ducasse’s restaurant Benoit in Paris, and met Alain Ducasse himself while dining at Benoit in New York. “I was like shaking,” he recalls. “It was like meeting Michael Jordan.”

Rouleau might get to meet Ducasse again; the renowned chef shared he was looking forward to checking out La Belle Helene after opening. The new restaurant’s menu, which Rouleau will have complete creative control over, will include items a la carte. The signature item will be chicken cooked over a rotisserie handmade in France; other cuts will be cooked on the rotisserie as specials. The restaurant is inspired by the traditional French brasserie, with impressive food and service but a casual vibe.

La Belle Helene is expected to open this summer, depending on construction, and will service lunch, dinner, and brunch. In the meantime, Rouleau says he is working on finding farmers and partners, hiring staff, planning for opening, and enjoying his new city home.

“Everyone I see in my building and on the streets, you make eye contact with someone they say hello,” he says. “They’re warm, it’s kind, it’s really great. Charlotte really seems like a hungry city.”